Romario Williams and Maikel Chang were the names on everyone’s lips Saturday night as the Battery dispatched Toronto FC II 2-0. Williams scored the opener just 11 minutes in before Chang added a goal of his own to go along with the assist of the first early in the second half.

With only three minutes gone, the Battery already were looking sharpest as goalkeeper Alex Bono let Williams steal in and claim the ball from his feet, but the forward’s first touch took him away from goal, which meant he had to turn and shoot instead of taking it in stride, and the ‘keeper atoned for his mistake by making a decent save from close range to deny the Battery’s top scorer.

Justin Portillo had another excellent game, and it was his ball that set up Quinton Griffith on the left. He controlled well before having a shot at goal which hit the side netting, but it probably wasn’t the best option as there were men queuing up in the middle for the full back to slide the ball across.

But the early pressure would indeed tell, as Ricky Garbanzo‘s perfectly weighted ball to Maikel Chang, who burst past his marker on the left before splitting the defense with an excellent ball up to the striker Williams, whose first time finish went off the ‘keeper and into the back of the net.

The goal was Romario’s third in as many games, and took his goal tally to five, which puts him squarely in 3rd place in the USL scoring charts. The goal also was somewhat precious to the home side, who’ve found early goals hard to come by this year, despite starting most games well.

And four minutes later, it could’ve been two. In an almost carbon copy of the first effort, this time it was Zach Prince who played in Garbanzo to have a go down the left side, and Garbanzo found Williams, but this time it was the ‘keeper, Bono, who would make the save to keep the score at 1-0.

In the 22nd minute, Mitch Traintor was booked for grabbing a streaking Ricky Garbanzo at midfield, stopping a counter opportunity which could have led to a chance for the home side.

But then, on the half hour mark, Toronto were threatening, as defender Wes Charpie headed the ball back across goal following a dangerous cross, but Adam Bouchard didn’t connect well and the ball was cleared.

Toronto would have a dangerous looking corner cleared on 34, before after 36 minutes, Aiden Daniels forced Odisnel Cooper into a good save after speeding through the Battery defense.

Obi Woodbine would speed past his marker on the right with 5 minutes left in the first half,  playing in a dangerous cross to Williams in the box, but the ball bobbled and the shot went over the crossbar. 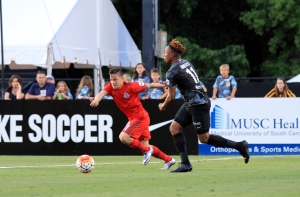 Taylor Meuller would have to leave the game after going down with an injury on the stroke of half time, and Forrest Lasso, who scored last Monday in the 3-2 win against Harrisburg, would come in at the start of the second half.

And with just five minutes gone in the second half, the home side doubled their advantage. Ricky Garbanzo, who had himself a good first half, recently back from injury, went down in the box, but the ball would pop back out to Maikel Chang, whose shot was blocked by a TFC defender, but Zach Prince would pick up the pieces on the rebound and recycle the chance, bringing the ball out to the wing and eventually crossing back in, and the ball was missed by two separate defenders before finding its way back to Chang, who coolly struck the effort first time past Bono in goal.

After the hour mark, a ball was played long and taken down well which looked dangerous for Toronto, but Obi Woodbine stood firm as his man tripped while trying to cut inside, and the ball was cleared. 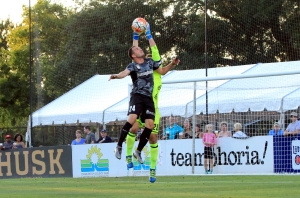 Then, there were a few substitutions made. First, it was Maikel Chang who came off for Dante Marini. Due to injuries, suspensions, and rest, Marini has played a decent amount of games in recent weeks, and is in good form, while he is often a threat off the bench. Chang’s goal and assist capped off an impressive week for the winger, where he was one of the bright spots in a two game road trip. Which isn’t bad, as he had recently returned from injury, and played 90 minutes in both games,  all this meaning he had surely earned a well deserved rest.

Chris Tsonis was the next Battery substitute, coming on for Romario Williams a few minutes later. Tsonis made his first start of the season for the Battery in Harrisburg, and was frustrated by his marker for most of the match, but did have some good touches, and Williams could again be proud of his night’s work.

With just about 15 minutes left, Toronto had another decent chance to reduce the Battery’s lead. A Corner kick from the left would be played in, but the flick on and shot would be saved by Odisnel Cooper, who was on the spot to collect.

And that’s how things ended. It was a good win and a solid showing from the Battery, who collected their first clean sheet since April 24th in a draw with Bethlehem Steel FC.

The next match is the beginning of the Battery’s cup adventure for 2016, as the Battery play Florida based Villages S.C.

This site uses Akismet to reduce spam. Learn how your comment data is processed.